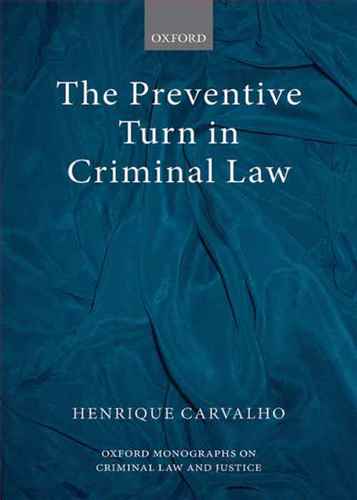 This volume throws down a challenge to traditional methods of thought about the criminal law. At a time when the principles of criminalization are much analysed and when features of the ‘preventive turn’ in criminal law are strongly opposed, this monograph examines the values that allegedly underlie the criminal law (notably, autonomy and liberty) and shows how in practice they tend to operate in tension with concerns about how that liberty is exercised by others, concerns which result in an emphasis on risk, security, and prevention. It is argued that the subject of criminal law is characterized both as an autonomous agent and as potentially dangerous, one of several dichotomies that represent a challenge to liberal criminal law theory. The flow of Henrique Carvalho’s argument draws the reader towards the case for re- engineering established concepts such as subjectivity and responsibility so as better to reflect the human condition and its political locus. Indeed, a substantial part of the reasoning derives from detailed discussion of the political philosophies of Hobbes, Locke, Hegel, and Bentham, while keeping the reader in touch with examples that demonstrate the difficulties that traditional criminal law theory encounters in supplying justifications for swathes of our current criminal laws. This is a timely and important book, marking a significant step in debates about the philosophy of criminal law.