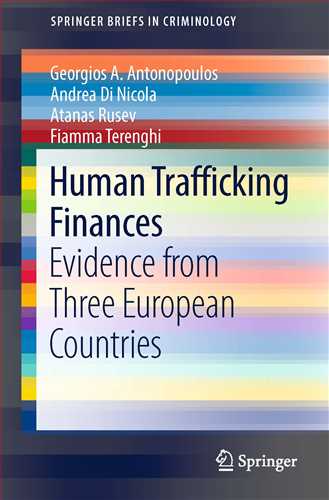 Due to the nature and the increasing prevalence of trafficking in human beings, heavy emphasis has been paid to victims as they typically experience slavery-like conditions, serious abuse and even life-threatening situations. Victimisation has been a focal point of efforts by government agencies, NGOs and international organisations. As a result, two particular forms, sexual exploitation and labour exploitation, have become relatively more visible and thus detectable than other forms of human trafficking, such as organ removal (see, e.g., Andrees and Belser 2009; Antonopoulos and Papanicolaou 2018; UNODC 2018). Accounts on the trafficking of humans for sexual and labour exploitation have little to say about the proceeds generated from this criminal business. According to the Financial Action Task Force (FATF), in addition to its human costs, trafficking in human beings is considered as one of the most profitable criminal businesses with forced labour alone estimated to generate more than US$ 150 billion per year (FATF 2018). In addition, accounts on human trafficking are not typically concerned with the everyday nature and dynamics of criminal investment practices. In fact, although the literature on human trafficking and other illegal markets is booming, research on the financial management of these manifestations of ‘organised crime’ remains, with some notable exceptions, relatively limited (see, for instance, Reuter 1985; Moneyval 2005; Levi 2010; Petrunov 2011; Kruisbergen et al. 2012; Soudijn and Zhang 2013; Antonopoulos et al. 2018; Di Nicola and Terenghi 2016).

Honor and revenge : atheory of punishment