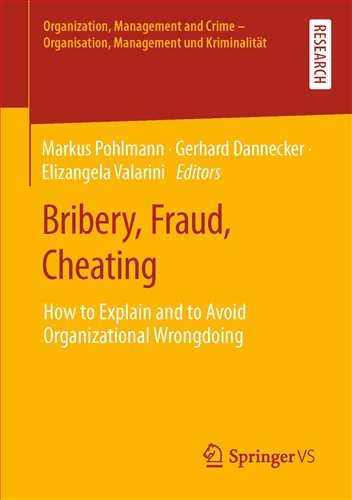 The fight against corruption, organizational wrongdoing, malpractice and orga-nized crime has entered a new era. The regulation and combat of public and private corruption as well as organized crime has become an international stan-dard of anti-corruption legislation and law enforcement, which has been adopted by many countries. The global diffusion of regulatory agencies, which began in the 1990s, took place mainly in countries with long lasting tradition of a regula-tory state and regulatory capitalism such as Brazil and China. In a joint effort to fight corruption, new international cooperation agreements were signed; interna-tional guidelines and governmental regulations were tightened and sanctions and penalties have become more severe. The boom in the regulatory state was ac-companied by a boom of compliance measures in the private sector, in companies, hospitals, football associations, etc. However, the trend of more stringent regulations at international, national and organizational level does not seem to have produced the expected results. Illegal behavior could not be pre-vented and new white-collar crime was exposed. This has happened not only through the transformation of established habits and customs of giving and ta-king into illegal acts or through more thorough monitoring, but also through the inability of globally operating companies to comply with all—often contradic-tory—new rules and laws in the different countries where they do business. New scandals at Volkswagen, Petrobras and Glencore raise the question whether they stem from the fact that the new regulations boom exerts an excessive burden on companies or simply from some individuals’ determination to commit illicit acts such as deliberate profit-seeking at any price.

Honor and revenge : atheory of punishment