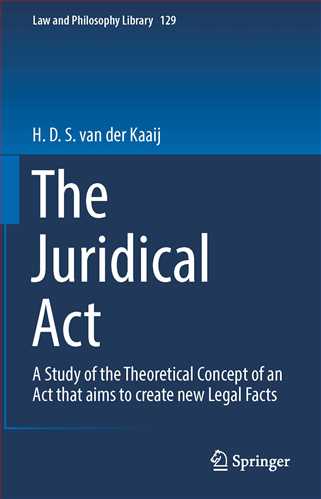 It is generally accepted that within Western legal systems there needs to be a possibility to perform an act which has the purpose of changing the set of legal facts. Not only can an act have that purpose, but also, because it has that purpose, the act can change the set of legal facts. Some examples of this type of act are: the possibility for an agent to intentionally enter into a contract, to make a statutory law, to transfer ownership of his property, to grant a licence, or to start a limited liability company. It is this group of acts that are the focus of this work. The possibility to intentionally create legal consequences is deeply rooted in the Western legal tradition.1 In most civil law systems, these acts by a (legal) person are classified as ‘juridical acts’. In Germany, although it is restricted to private law, the concept of the ‘Rechtsgeschäft’ is used.2 In France, the concept of the ‘acte juridique’ is hardly codified, but it plays a role in legal private law discourse.3 In the Netherlands the ‘rechtshandeling’ is codified and deemed to be present in both private and administrative law.4 Some countries have not codified the juridical act at all, even though the concept plays a role in legal doctrine. This is the case, for example, in Italy, where the ‘negozio giuridico’ is a central concept in legal doctrine