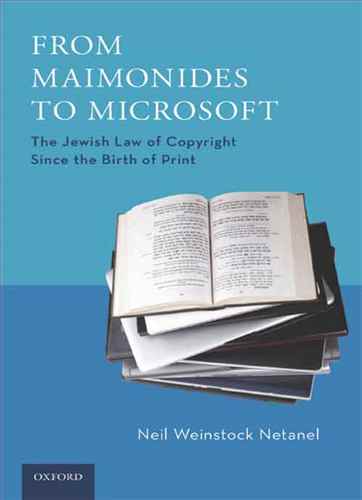 From Maimonides to Microsoft The Jewish Law of Copyright since the Birth of Print :عنوان

My friend and colleague, David Nimmer, and I planned to write a book together about the Jewish law of copyright for almost three decades. Our project was seeded, first, when we studied Talmud together as young lawyers in the early 1980s and, second, when Benyamin Bar-Zohar, the rabbi who officiated at my wedding, informed me about the existence of a Jewish law of copyright and lent me a manuscript by Jewish law scholar Nah??um Rakover about rabbinic reprinting bans. Hence my first debts are to Rabbi Bar-Zohar, without whom I might never have embarked on a study of Jewish copyright law, and to my collaborator David Nimmer. Before David had to drop off the project due to other pressing commitments, we studied sources together; discussed ideas for the book at length; traded drafts, editorial comments—and many jokes; presented our work at academic conferences; and wrote preliminary articles, both jointly and separately. Portions of Chapters 6, 7, and 8, and of the Glossary and Biographies, draw on David’s early drafts, and the entire book bears his inspiration, guidance, and unending support. I cannot thank him enough. As initially envisioned, our book was to be a basic introduction to the Jewish law of copyright for our fellow students and practitioners of secular copyright law, who are largely unaware that there even is such a thing as copyright in Jewish law. But as our study deepened, so did our project. The book now delves far more rigorously into questions of halakhic doctrine; the historical development of Jewish law and external, non-Jewish influences on that development; the historical context in which early modern rabbis enunciated a Jewish law of copyright; and parallels between the Jewish law of copyright and its secular and papal counterparts. I thus hope that our book will be of interest and use to students of Jewish history and the historical development of halakha as well as secular copyright law.